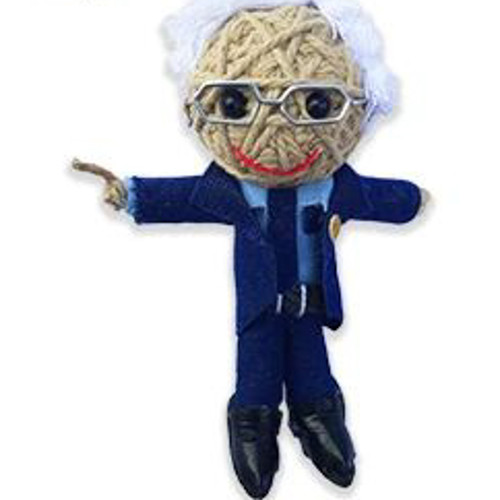 This small Bernie Sanders doll, primarily made from string, is handmade in a fair trade workshop in Thailand. It has a lobster claw clasp to attach to your keys, backpack, purse, etc. and is about 3" high. It serves well as a key chain or charm. Each doll has a laminated tag featuring a Bernie Sanders quote, such as "Nobody who works 40 hours a week should be living in poverty" or "If the environment were a bank it would have been saved by now."

Appropriate for ages six and up due to small parts.

About the brand: Kamibashi is a small business based in North Carolina with production in Thailand. It is a long-time member of the Fair Trade Federation and contributes a portion of sales to a variety on non-profits, including The International Fund for Animal Welfare and The American Red Cross. It's best known for The String Doll Gang, a line of small dolls attached to a lobster claw key ring and a tag stating the doll's "special power".